In this article you get familiar with basic concepts behind GARCH models family and practical use of it.

Firstly we see that value of dependent variable

can be chosen as conditional mean of

. In other words we model every

[4] and i.i.d. random variable from normal or

are not correlated but are dependent through

term (later we will briefly see

is changing non-linearly with every

through a function of

. Since now we should know what autoregressive conditional heteroskedasticity means.

After discussion above we can quickly formulate the ARCH model which was introduced by Rober Engle in 1982. If we take (2) and specify condition(based on historical information

-distribution, zero mean and unit variance. As mentioned earlier in practice we can drop

or regress mean with exogenous explanatory variables as

or use any other suitable model. Recall that significant fluctuation in past innovations will notably affect current volatility(variance). Regarding positivity and stationarity of variance

, coefficients in (3) condition have to satisfy following constraints

GARCH model was introduced by Robert Engle’s PhD student Tim Bollerslev in 1986. Both GARCH and ARCH models allow for leptokurtic distribution of innovations

and volatility clustering (conditional heteroskedasticity) in time series but neither of them adjusts for leverage effect. So what is the advantage of GARCH over ARCH? ARCH model often requires high order

thus many parameters have to be estimated which in turn brings need for higher computing power. Moreover the bigger order

is, the higher probability of breaking forementioned constraints there is.

GARCH is “upgraded” ARCH in that way it allows current volatility to be dependent on its lagged values directly. GARCH(m, n) is defined as

In practice even GARCH(1, 1) with three parameters can describe complex volatility structures and it’s sufficient for most applications. We can forecast future volatility

is unconditional variance of innovations

. So prediction of volatility goes with time asymptotically to the unconditional variance. If you are interested how are derived mentioned results and further properties of GARCH and ARCH I recommend you read this friendly written lecture paper.

Finally we get to the model which adjusts even for asymmetric responses of volatility to innovation fluctuations. GJR-GARCH was developed by Glosten, Jagannathan, Runkle in 1993. Sometimes referred as T-GARCH or TARCH if just ARCH with GJR modification is used. GJR-GARCH(p, q, r) is defined as follows

are leverage coefficients and

is indicator function. Observe that for

give additional value to volatility

thus we achieve adjustment for asymmetric impact on volatility as discussed at the beginning of the article. For

we get exotic result where upward swings in return or price have stronger impact on volatility than the downward moves. Need to mention that in most implementations of GJR-GARCH we will find GJR-GARCH(p,q) where leverage order

is automatically considered equal to order

. Parameters constraints are again very similar as for GARCH, we have

Prediction for GJR-GARCH can be estimated as

If you are interested in analytical solutions for predictions of non-linear conditional variance models read Franses-van Dijk (2000).

Denotation: I was using

as dependent variable, since now let

I will demonstrate GARCH(m, n) estimation procedure on returns of bitcoin daily price series which I used in earlier post about volatility range estimators. Let’s have look at input data. 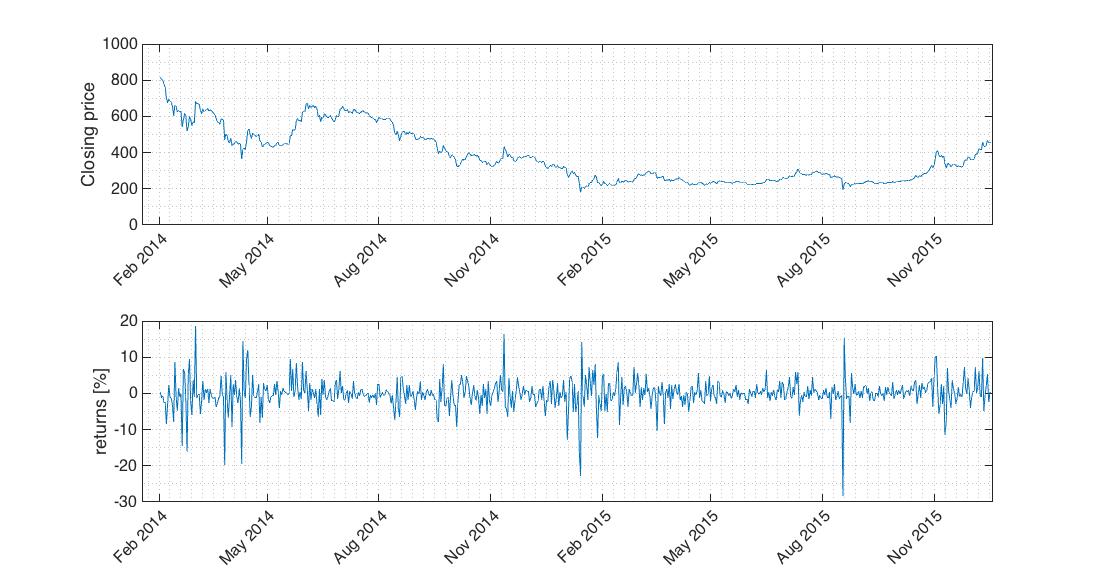 Fig.1 Volatility clusters in returns series are obvious at the first glance.

conditioned by its lagged values? ACF, PACF and Ljung-Box test[5] help us in this decision. Note that

series is stationary with mean

very close to zero. We could use everywhere just

but correct is to use innovations/residuals. 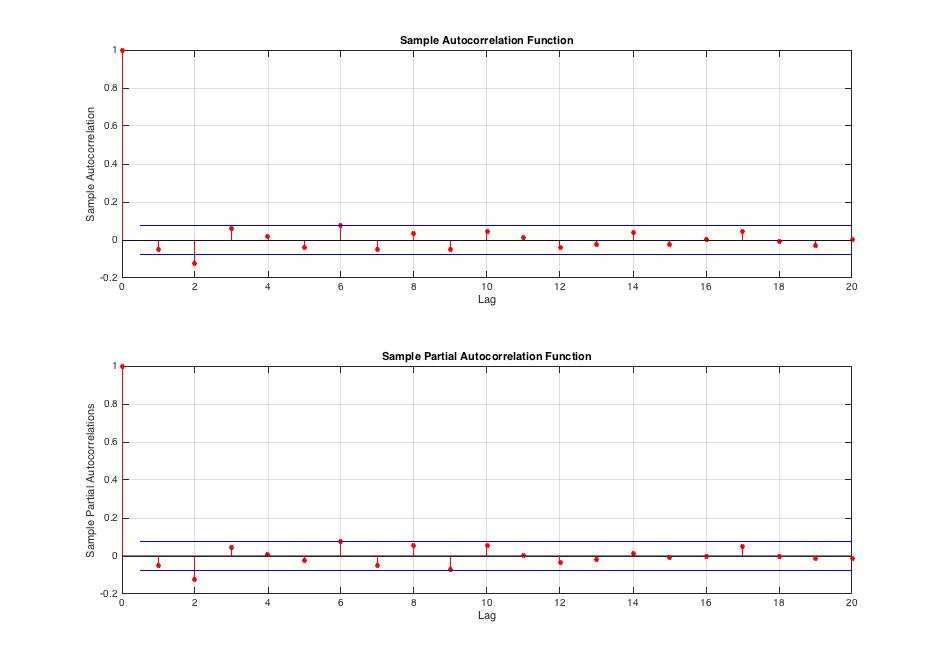 ACF and PACF show us that returns are autocorrelated. We can also reject Ljung-Box test 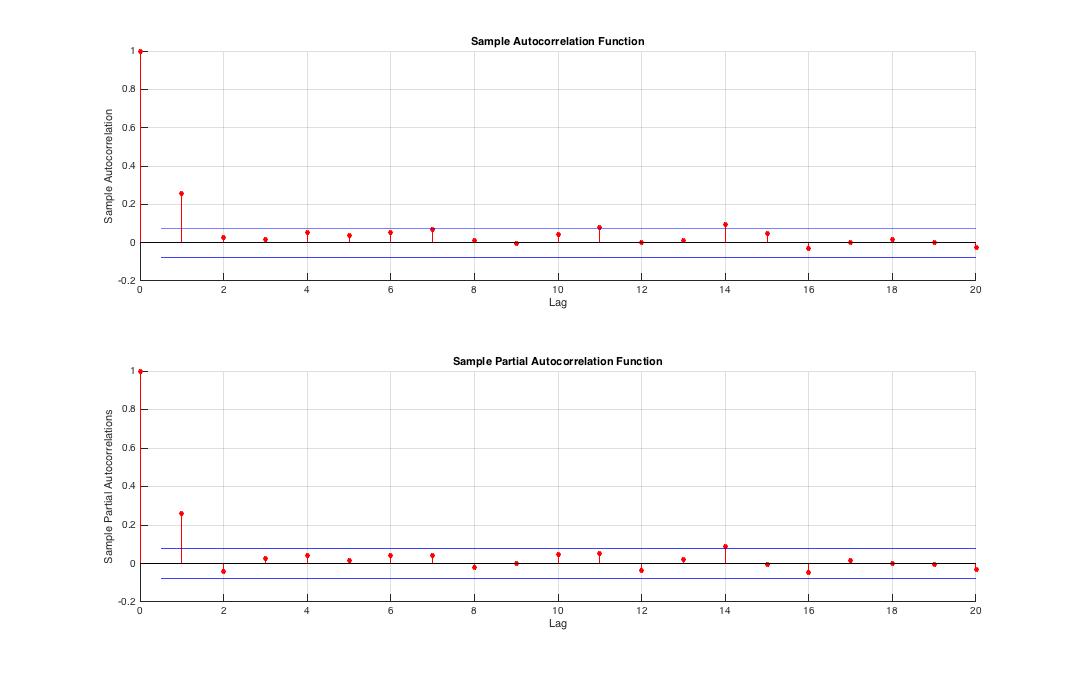 which tells us that variance of returns is significantly autocorrelated thus returns are conditionally heteroskedastic.

in favor of the

as ‘lags’ input into the ARCH test. What do we expect

to be? Bigger lag we choose, bigger

we can expect. It is naturally caused by that we include more and more values that are not significantly autocorrelated in the ARCH test therefore probability of not-rejecting

Here we go, we made sure that we can apply (1) to given data. After slight modification we have

is conditional mean and

is conditional innovation. We describe our

by AR-GARCH models by setting up the ARIMA model objects.

This model corresponds to

where we suppose that

and i.i.d. We will compare quality of both models using information criterions.

which we can recursively infer. We found out that

in (5) thus has no explanatory power for returns as dependent variable. Moreover it seems that innovations autocorrelation is not strong enough to give statistical significance to

don’t fall into the critical region so we can’t reject hypothesis about zero explanatory power of these two coefficients.

. In this case all estimated parameters except of

We can also try to model variance using just pure GARCH(1,1) with constant

We get similar results as with AR-GARCH approach because AR(2) plays insignificant role in AR-GARCH:

So which model choose now? Model with

-distributed innovations seems to be promising. Let’s examine it quantitatively by AIC[9], BIC[10]. Before we can compare our models we need to infer log-likelihood objective functions for each of the model. We can also extract final conditional variances – volatilities.

So both AIC and BIC indicate that AR-GARCH with

-distributed innovations should be chosen.

-distributed innovations using AIC and BIC. We will define just version with

therefore original AR-GARCH slightly outperforms AR-GJR-GARCH. Actually it is obvious from the output of AR-GJR-GARCH estimate because leverage coefficient is statistically insignificant.

Our resulting conditional mean and variance model is AR-GARCH with

in the following form

Let’s plot closing prices along with AR-GARCH with 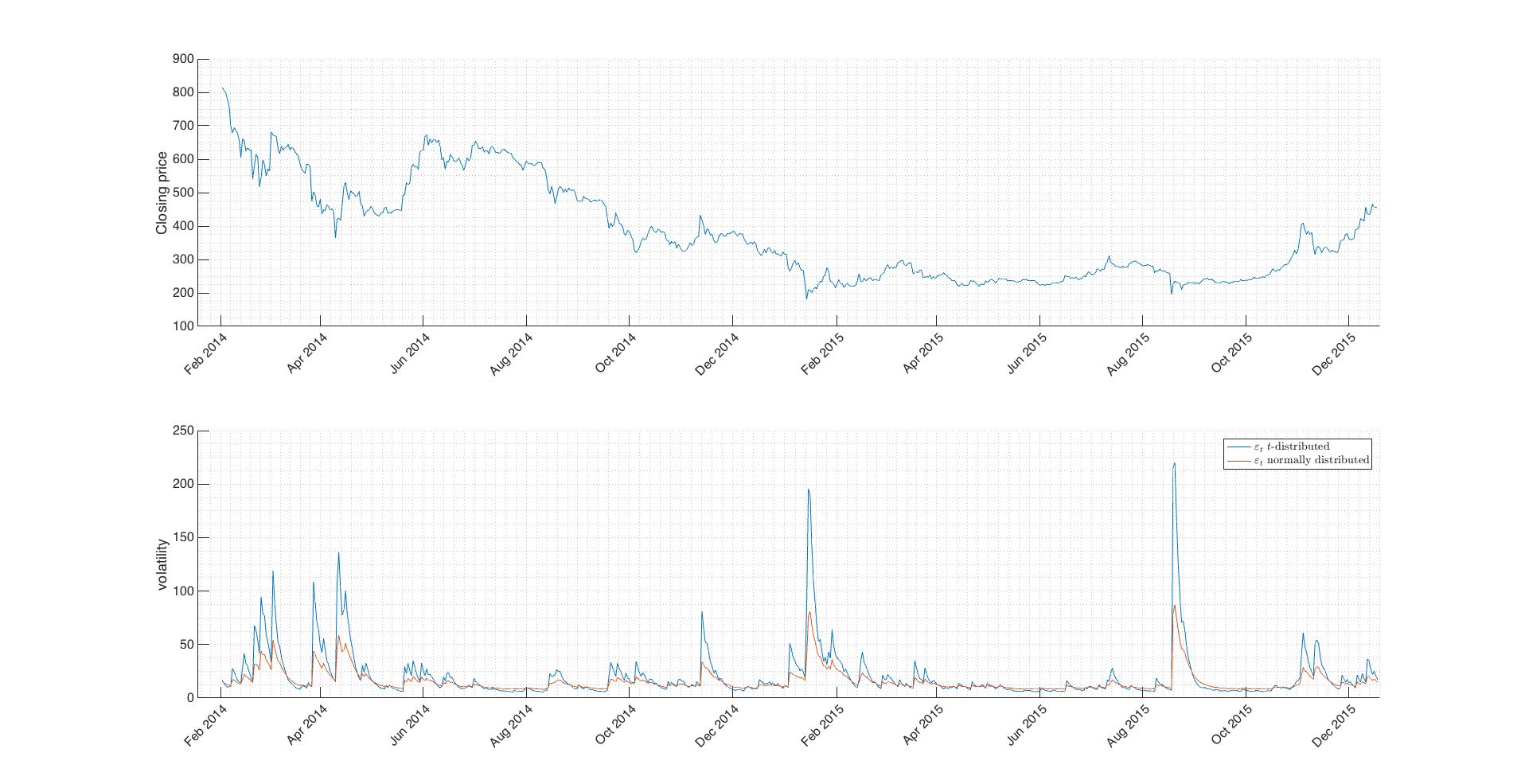 Download all code in one in GARCHestimation.m matlab script.

For purpose of this text we consider excess kurtosis as

is fourth centered moment about the mean and

is clearly squared variance of

. PDF of the random variable

is respectively said to be platykurtic, mesokurtic or leptokurtic. ARCH models allow for leptokurtic distributions of innovations and returns.

Suppose we have a vector of variances

and a vector of values of dependent variable

, then information generated by

is considered to be

-algebra generated by given set of vectors. So if we have whatever conditional variable it just means that we suppose its value is dependent on some other values through a function.

Auto-regressive process AR(p) is defined as

After slight modification we can us AR(p) as

4. Just common denotations for one value, take a think just about last equality.

Test whether any of a given group of autocorrelations of a time series are different from zero.

: The data are independently distributed (up to specified lag

: The data are not independently distributed. Some autocorrelation coefficient

discussed by many students and practitioners forevermore. There are many intuitive interpretations of this value, some of them correct some of them not. I recommend you find your one which fits your mind best. For me personally it’s “the greatest significance level up to which we would not reject the null hypothesis”. Sometimes it’s being said to be plausibility because less

is, less acceptable null hypothesis is.

: The squared residuals are not autocorrelated – no ARCH effect.

: The squared residuals are autocorrelated – given time-series exhibits ARCH effect.

We use one-sample T-test with hypotheses defined as

is parameter in question.

Akaike’s Information Criterion (AIC) provides a measure of model quality. The most accurate model has the smallest AIC.

The Bayesian information criterion (BIC) or Schwarz criterion is a criterion for model selection among a finite set of models, the model with the lowest BIC is preferred.